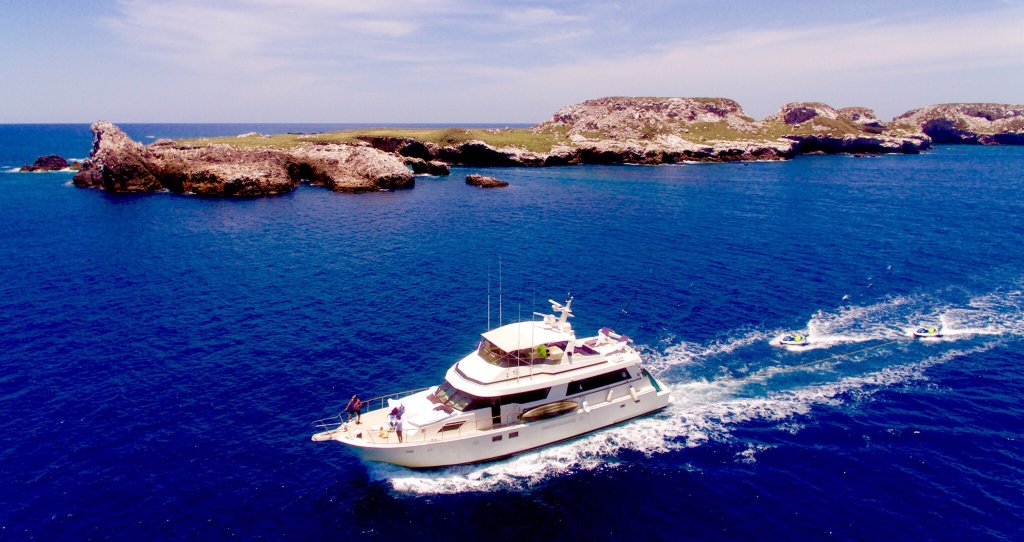 We were lucky enough to charter a yacht and explore the entire Banderas Bay on a beautiful 75 ft. Hatteras yacht.  There were six of us chartering the yacht and we were concerned about comfort and room, well that was not something we needed to worry about because the yacht is fantastic and has plenty of room. There were 4 bedrooms (called staterooms) 3 bathrooms (called heads), a large living and dining area with plenty of seating, a back deck for fishing, the bow of the boat for lounging and then the bomb, the fly bridge deck, this area is awesome with a bar and couch seating. 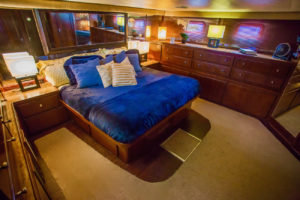 I am writing this blog to share my experience with the world because I think everyone needs to do a weekend trip in Banderas Bay, Puerto Vallarta. There really is only one word to describe the feeling of being on the water for 3 days “ecstasy”.

We did the 3 days and 2-night trip which started first thing on Friday morning at around 8, we arrived at about that time and the crew of 4 for the Aurora was waiting for us with mimosas in hand. They then gave us wet rolled towels to wash with just like a fine restaurant would do. After a few minutes of relaxation, they showed us around and to our cabins. My wife and I got the master cabin and the guests took the other 2. We quickly dropped our bags and went back upstairs where the chef was preparing a full breakfast of eggs, bacon, sausage, hash browns plus fresh fruits and pastries. This was a wonderful way to start our journey. While they prepared breakfast we all headed up to the fly bridge while the captain pulled the yacht out of the marina and into the bay. We were all so excited about this and could not believe the time was here. This was our first experience to stay on a boat, of course we were staying in Puerto Vallarta for 2 weeks at a fancy resort, but this was the part of the trip that I was looking forward to, to get away from the city and see a different part of Mexico. 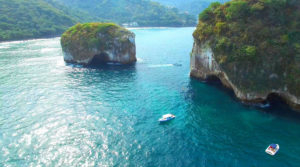 As we cruised across the bay sipping our mimosas, all we could think is how beautiful everything was and how fun the weekend was going to be. They served us breakfast on the fly bridge so we could continue to watch the beautiful waters of the bay. We approached some fantastic rock structures in the water and they happened to be Los Arcos. I guess this is a very famous rock structure that many of the tour boats take the guests to for snorkeling. There were tons of people in the water and a lot of boats, so the captain told us that there is far better snorkeling at some of the areas we are going to stop during our trip. We continue to an area called Quimixto, the captain ties up to a buoy and shuts the engine down. Of course, the air conditioning is on in the main cabin so if we got hot we could chill in there while the crew pulls down the paddle boards and kayaks for us to use. From there we swam and enjoyed the water toys and then took an excursion to the beach. There are a few restaurants there if you want to enjoy food, but we just had a drink and enjoyed the local scenery and people watching before catching a panga back to the boat. The captain suggested a snorkeling area, so we decided to check that out, the captain was right, we saw giant manta rays, octopus and plenty of fish, it was really cool.

While we were snorkeling, the chef was preparing some shrimp tacos and rice with tortillas, they were excellent. The captain then moved on to Yelapa Bay, which would be our overnight spot. Yelapa bay was gorgeous with a large beach area and a dock on the other side. As soon as we pulled up, one of the panga boats stopped by to see if we needed a ride but we decided to hang on the boat for a while. So, over the next few hours we enjoyed the bay, music and drinks and of course the boat. One of the girls decided on a nap in the air-conditioned cabin of the Aurora. We all enjoyed the boat the rest of the afternoon and decided to hang there and watch the sunset, that is absolutely the best way to enjoy a sunset. The chef had fresh grilled fish (mahi-mahi) covered with shrimp and a special diablo sauce planned for dinner under the stars. It was a great ending to a perfect day. We all went to our staterooms, although it was early but we were all tired. Sleeping on a boat is heaven, between the sounds of the water and the motion of the boat, you will get a great night’s sleep. It is also nice to wake in the middle of the night and go to the fly bridge and watch the stars and heat lightening off shore. 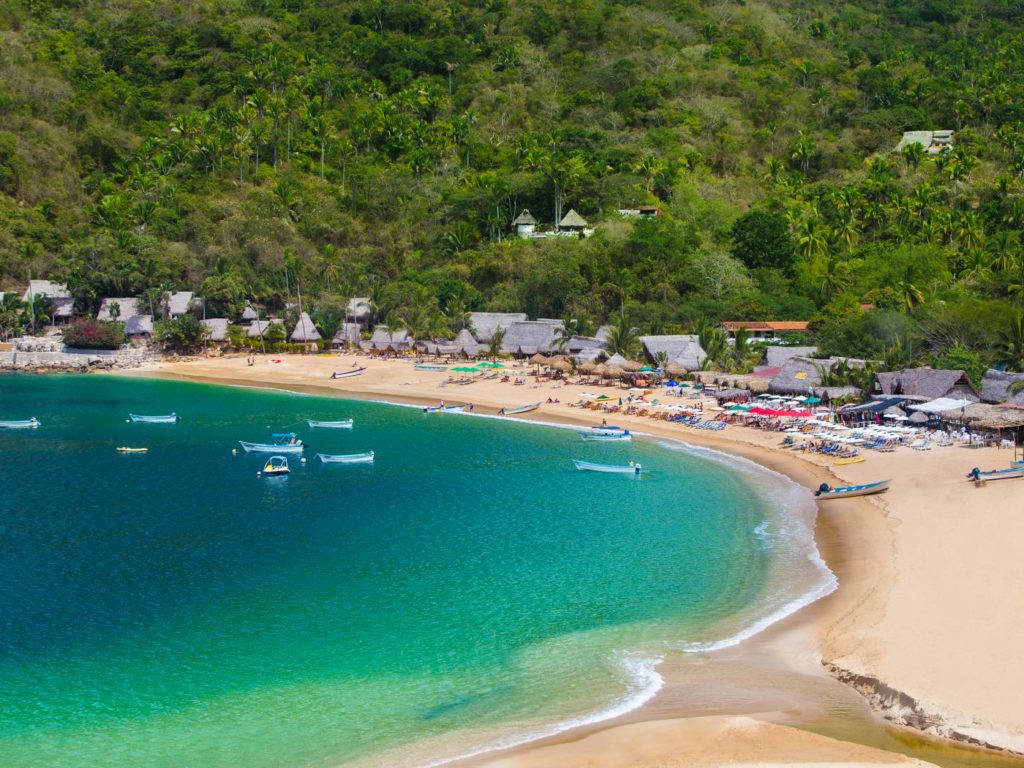 At sunrise we awoke to coffee, pastries and juices and the chef was ready to make us a full breakfast. We relaxed for a bit and once the others were up, we decided to go to town and take a hike to the waterfalls at about 9ish in the morning. Yelapa is a quaint small fishing village with some stores, restaurants and bars along the hike to the falls which was about 15-20-minute hike. The waterfalls were really flowing because of the rain in the mountains so it was extremely nice. The water was cold but refreshing, there are a lot of rocks to hang on and catch some of the sun rays after dipping into the cold water of the waterfalls. On our way back, we saw plenty of wildlife such as iguanas and donkeys. Although probably not all wild because we also saw someone hauling stuff up the mountain on a donkey.  We bought a bottle of Mexican moonshine from an old guy along the hike called raicilla. It is some potent stuff and I guess he makes it right in his own home in Yelapa. We continued to walk and eventually landed down on the beach along all the restaurants, took a dip and then went back to the boat.

We geared up for another day of excitement in Banderas bay. On this day we cruised along the bay and did some fishing. They threw in 4 lines while we were heading toward the bay of Tehua. It was not long and the crew member yells pescado, (fish) on. Several of us got down there, he handed the rod to me and I started to bring in the fish. I could tell it was not a giant but still had a bit of a fight in him. It ended up being a skip jack which I guess is in the tuna family and are delicious to eat. It was only a few minutes until another fish was on and we ended up with 4 fish that morning. The chef said he would make some ceviche from them and get some fillets off the others. The next thing was for the inner kids in us, the water tube. My wife and I got on the tube and the boat pulled us behind while on our way. We even had beverages on the tube, it was a lot of fun and everyone got their turn. There was another stop along for a snorkeling spot that the captain said should not be missed so we stopped and snorkeled again. I’m glad we did as there were thousands upon thousands of various kinds of fish, a spectacular sight to see. After cruising, fishing, snorkeling and relaxing we arrived into the bay of Tehua. The captain tied up to a buoy and we decided to go to shore and have some food at one of the restaurants around the bay. I do not remember the name, but it was very nice with tables overlooking the bay. This small town is the home to the some of the best oysters that you will ever taste. They farm raise them there and they are large, juicy and really tasty. We met some nice people and had a few drinks before heading back to the boat. We stayed in Tehua for the night as it was protected and had a nice mooring to tie to for the night. The nights are spectacular, on this night we were lucky enough to have a full moon and a clear night so you had so many stars, it was amazing. The chef prepared a surf and turf with some Canadian filet mignon and lobster tails for a late dinner with several bottles of wine. We laughed and played cards till about 10 PM before calling it a night.

We had another great day and night on the water and noticed upon waking that we were already on our way back. We awoke and had some coffee and baileys and the chef made some excellent omelettes with the leftover lobster and steak from the night before. Wow, that was a delicious omelette, probably the best we ever had. The cruise back was nice as we all just relaxed and got some sun and did some reading. At about 12 noon, we were passing by Yelapa so the captain decided to make a stop and give us all some swim time and kayaking time. The chef prepared some fish sandwiches for lunch and we had some frozen piña coladas and banana daiquiris before starting the final leg of our trip. We arrived back to the marina about 5 PM. This overall journey was amazing and it is something that everyone should experience some time in your life. The water (bay) world is an amazing world with so much beauty and nature that you do not want the trip to end. The staff was fantastic and from the very start and were there for our every need or want during the entire journey. Thank you to the owner Douglas Zakes for a weekend we shall never forget.  Yacht Charters Puerto Vallarta has proved to be one of the best in the bay.